Welcome to the latest edition in our series of features about the life and times of former students of New Town High School, Hobart Technical High School and Hobart Junior Technical College.

In this edition, we’re very pleased to introduce you to Ralph King, a student of Hobart Junior Technical College from 1944 to 1947.

I spent a very interesting and informative time talking to Ralph, and may I just say that at 88 years of age, Ralph’s continuing enthusiasm and interest in the business he established many years ago is somewhat inspirational. I’ll apologise in advance for any errors I may have made in transcribing my own notes.

In putting this story together, I promised Ralph that I would do my utmost to get everything down properly, and he told me that he’d be checking, as he’d hate to have to mark me down at 2 out of 10. So Mr King, here we go.

When Ralph commenced at Hobart Junior Technical College in 1944, classes were formed into groups, and in addition to the standard subjects of Mathematics, English and Science, technical subjects such as carpentry, metalwork, electrical engineering and technical drawing were studied.

Ralph told me that for the day, the College workshops were the equal of any other workshop in town, and the teachers were first class to match. Jack Enerveer (my apologies if I have this name wrong) was mentioned particularly as an enthusiastic teacher in the Fitting and Turning Workshop.

One thing I picked up during our conversation was that Mathematics tended in those days to have been learned with a certain degree of fear. Room 39 was the Mathematics room in those days, and was entered by most students with the same trepidation that later students (myself included) felt when summonsed to the Deputy Headmaster’s office at New Town High School.

Not being a huge fan of sport, Ralph’s skill and enthusiasm in woodwork engineering led him and a fellow student to use sports periods to build twelve foot sailboats, which the College used to race for the Sandy Bay Dinghy Club.

An interesting little story Ralph told me was that when living in Moonah, he had to transport his sailboat to Cornelian Bay and back again using mechanical means. Travel to Cornelian Bay was downhill and quite simple, not so the return trip.

Ralph decided that he would try the uphill leg past Ogilvie High School with the jib set to catch some breeze. With the addition of the main sail, heading home uphill was a simple task. On one such trip home, he was overtaken by an Austin car which the stopped in front of him.

Out of the Austin stepped Sir Hugh Binney, the Governor of the day. Ralph told me that this was the last time that the trip home took place under sail. It is a matter of some pride to Ralph that since meeting Sir Hugh, he has met every Tasmanian Governor.

Ralph obviously enjoyed and excelled at his work though, and finished his school years in 1947, and in 1948, undertook a four year fitting and turning apprenticeship with Saunders and Ward. He told me with justifiable pride that all of his fellow students were outstanding, there were no average students.

Ralph had been offered a cadet engineer position at one of Hobart’s largest industrial complexes, but chose the apprenticeship in preference because in his words, “You can’t climb the ladder of success unless you can get your fingers on the bottom rungs.”

Ralph by this stage already had his first metalworking lathe at home, a tool that he still has and uses more than capably.

On completing his apprenticeship, Ralph left Saunders and Ward, as he didn’t feel that there were appropriate opportunities available for him to continue to further his career.

After completing a diesel mechanic course, Ralph worked for Webster Ltd, building engines and setting up their injector room. A particular type of vehicle being sold had a whining differential, which was more of a problem to Ralph than it was to the sales team, so Ralph used to take the part home after work, repair it and take it back to be refitted.

Ralph also found that there were numerous motor cycle parts that couldn’t be bought, so he started to make them himself. He soon found that he was too busy to go to work, and turned his hand to other engineering work including building the first triple carburettors for Holden vehicles, and making extension gear levers for another make of vehicle.

Mobile welding machines were built, along with cars used to go into the Mt Lyell mines.

I found myself listening to Ralph with such interest that some of my notes may be a little disjointed, so rather than run the risk of getting key information wrong or out of order, the extent of Ralph’s development of his business is perhaps best described from here in terms of the many significant stages of growth, which started as a result of his recognition of the need for trailers for boats.

During the 1970s, Kings Trailer Industries started building and selling caravans, and this expanded into servicing and repairing all makes of caravans, including the household name brands.

In 1984, Kings started building motorhomes, and found that the rate at which they were being built was considerably faster than the motor dealers could assemble the commercial vehicles for them, so Kings took over the vehicle assembly function for one of the dealers of the more widely used vehicles.

In 1989, Kings Caravans became the Tasmanian distributor for Jayco Caravans, and in 2020 the business trading name was changed to Jayco Tasmania.

In between times, other significant steps were taken by the company, keeping it a constantly evolving business which keeps pace with trends in the trailer, caravan, camping and off-road activity markets.

The business had expanded to the degree that additional property needed to be acquired to cater for the growth in the caravan sales business, a new site for Jayco servicing, warranty and repairs, a new retail spare parts and accessories outlet for most camping and off road products, and support for fitting towbars, electric brakes and accessories for towing vehicles and motor homes.

Ralph’s two sons and daughter are all actively involved in the business in varying capacities, and while it has been a few years since Ralph has actually been on the payroll, he is still active in doing design drawings, and spends 4 to 5 hours per week around the caravan yard, and with an average of between 10 and 20 caravans and motor homes being sold every week, he is personally aware of every van in the yard.

He remains as keen and enthusiastic now as he ever has been.

Away from business, Ralph and his sons had spent many years involved in powerboat racing, and have between them held a number of Australian racing championships. Ralph continues to be a huge advocate for Tasmania, and for the achievements of Tasmanians on the bigger stage.

With obvious relish, he told me that while Mainland racing boats were capable of speeds of around 70 miles per hour, the boats that he and his family raced pulled speeds well in excess of 100 miles per hour. At that point, the vision of him speeding up Main Road New Town in a sailing boat came back to me.

It would be very easy to sit down again to chat with Ralph, because he is a very interesting and enthusiastic man, even at a stage in his life when younger men are looking for their slippers and contemplating an afternoon nap.

I know that this story barely does justice to Ralph’s accomplishments in life and in business, but it does I think clearly highlight that he and other students of our school and its predecessors are certainly capable of being as innovative and forward thinking as students of other schools.

In Ralph’s own words, “I never look back, I only look forward.” Does anyone else note a similar message in the NTHS motto “We Build For The Future.” 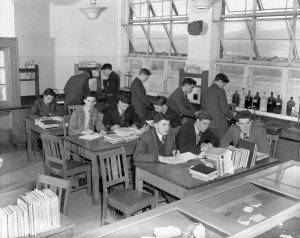