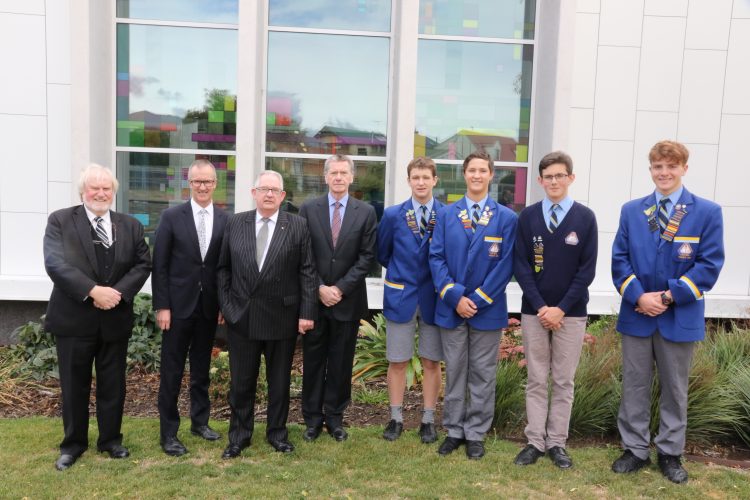 On 6th March 2019, the school debating team took on some rather serious opposition. Three Supreme Court Judges, all former NTHS scholars had agreed to a debate to help celebrate the school’s Centenary.

In the Affirmative Corner, we had ‘their hons’, the Justice Crew – Justice Robert Pearce, Justice David Porter, Justice Stephen Estcourt , three of our eminent old scholars who have put memories of Recorder Group, Rugby, Hockey, Water Polo, aside and serve our community with wisdom at the highest court in the State.

In the Negative Corner, we had a preeminent Gen Z trio of New Town High debaters – Luke Van Emmerik, Charlie Pilkington and Evan Stone, speaking on behalf of school-aged teens.

The stage was set for the verbal stoush of the Centenary, a truly great debate on the topic ‘That the Voting Age Should Be Lowered to 16’ with former old scholar and Solicitor General Leigh Sealy as moderator. The adjudication panel comprised the Department of Education Secretary, Tim Bullard, Former Principal Ian Morgan and eminent scholar and debater, Peter Legg.

Before an audience of students, old scholars and friends of the school, the Justice Crew or The Justice League set forth with wisdom, generosity of spirit and an elder statesmen faith in youthful aptitude for guiding change and determining good governance in our nation. This against a trio whose stance is summed up in Charlie Pilkington’s opening statement as second speaker –

‘I, on behalf of teens everywhere, plead guilty. I plead guilty to being an emotional, uncooperative mess.  I plead guilty to prioritising Fortnite and Instagram above all else, and knowing little to nothing about political systems and my civic responsibilities. My sentence – in the absence of hard time or community service – is simply the lack of a vote in a system that I know nothing and care little about. Parole – the day I turn 18. I do not wish to appeal this most generous verdict, and neither does the rest of Generation Z. ‘

Debating is a sporting contest where marks are taken with balletic skill, where points are scored with darting speed and finesse, and sides defended with all the strength of Guardians of the Galaxy.  There is a constant thrust and parry, appreciated and acknowledged by an audience ready to engage in laughter and a certain awe. The Justice Crew were formidable in their strike rate, rising to a crescendo of points scored in the third speech delivered with fine humour by Justice Estcourt.  And yes, the youthful Negative team did perhaps score marginally more points as ‘Ev’nm’ Stone rallied home in a rap, slam poetry burst of intellectual prowess that had the audience marvelling in awe even as they laughed at his comedic brilliance.  But, as chief adjudicator Peter Legg, noted in his commentaries, ‘the winner on the day is New Town High’.

It was indeed a great debate, a debate worthy of a centenary of New Town High scholars building for a fine future with a firm foundation of learned understanding, wisdom and esprit de corps. As an audience, we acknowledged the power of the word to persuade and entertain, to connect us to all that is fine in a tradition of community. And as we laughed, nodded in agreement and marvelled with awe at the wonder of the human intellect, we became warmly aware of that pride in our own belonging to that community of men that stretches for a hundred years. A brave and fine community it is that counts among its members such worthies as our Supreme Court Justices, our Solicitor-General, our former State debaters and our current holders of that baton and torch that sees us continue to strive in ou building for the future.

Many thanks to our Old Scholars Association for planning and organising the debate, to their honours for giving so generously of their time, their wisdom and their warmth to the event and to our debating team for their fine performance. May there be many an encore!

Note: NTHS has a great tradition of debating and there is a opportunity for a law firm or other business to sponsor an annual event. If you are interested, please contact us.